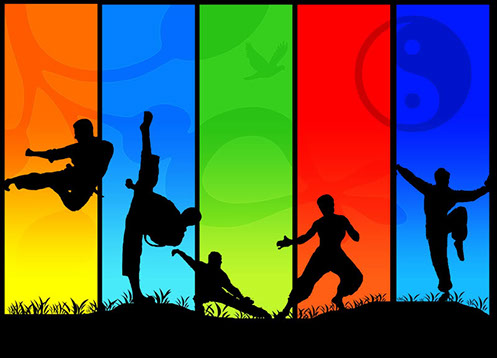 The Roots of Martial Arts

Chinese Buddhist monastery of the “Chan” school located in the Sung-Shan Mountains of Tung-Feng county Honan province. The temple is named after its surrounding small forest of trees. Built by Emperor Hsiao Owen in the late 5th century A.D. its construction honored the Indian monk Bodhiruchi. Robert W. Smith, in his book Asian Fighting arts, quotes a source describing the temple: “It) had twelve upper and lower courts and was ringed almost completely by the mountains, festooned with bamboo, casia, and cedar trees, and laced with waterfalls.” In the Sui dynasty, early Ch’ ing, and once again in the early 20th century, the temple was seriously damaged. Surviving structures renovated by the People’s Republic of China include the front gate, guest hall, Bodhidharma pavilion, and the white rob hall, with two frescoes depicting monks exercising and sparring-the northern wall depicts sparring exercises of the liu-hech’uan (six-methods boxing) and on the southern wall are a number of monks engaged in weapons training. Also surviving are the thousands-Biddha hall and the forest of stone tablets.

This temple became a focal point for martial arts training at one period of china, but not on the grand scale Western journalist and film makers depicted. More often than not, kung-fu styles have little if any religious background. Religion’s role in the martial arts was very small in the overall scheme of things. The Shao-lin order was the exception, not the rule. Evidence identifying the creators of the Shao-lin style itself is inconclusive. Three theories have emerged. The first attributes the creation to the Indian priest Ta-mo (Bodhidharma), who followed his predecessor, Bod hiruchi, to the middle kingdom several decades after the construction of the temple. This story, though unsubstantiated, is the most popular. It paints a colorful picture of Ta-mo as a staunch ascetic, confining himself to a cave for nine years, where he sat facing a wall in meditation (the cave can still be viewed). The second theory attributes its creation to Hwei-Kuang and Sung-Chou, monks preceding the most probable, attributes the style’s origin not to any single individual, but to the collective efforts of the priests over the years. The People’s Republic of China had been investigating the temple’s origins and development. One source, the History of the Shao-lin Monastery, appeared as a four-volume work. Yang- Ya-Shan referred to this work in a translated article, stating that the Shao-lin school of ch’ uan-shu (kung-fu), and that is originated in the Sui (581-618) and T’ Ang (618-907) dynasties, after which it branched into a number of subsystems.

Shao-lin,” he explains, “first served military purposes in the early T’’Ang dynasty when the first emperor, T’ ai-Chung, appealed to the Shao-lin monastery for reinforcements against Wang “She-Ch’’ung,who sought to establish a separate regime in Lo-Yang. Joining the punitive expedition, the Shao-lin monk- soldiers captured Wang alive. Thirteen of them were cited for meritorious service, including monk T’ an-chung, on whom was conferred the title of Major General. In addition, the monastery was granted 400 mu of land and allowed to set up barracks to give the monks military training. At its peak, Shao-lin boasted a force of 5,000 monk-soldiers. It was known far and wide as the ‘number-one monastery under heaven. “Apart from the bare hand Shao-lin ch’ uan exercises, monks also learned chi-kung (breathing exercises), horsemanship, and combat with weapons. They became in effect a special detachment of the Imperial army.

While the upper ranks of the military class were exposed to education, their retainers seem to have concentrated almost exclusively upon perfecting military skills. The lower samurai was trained at home or in clan centers for military instruction. His education in the literary sense was neglected; there was a continuing condition of the establishment of schools of lower samurai. The tokugawa encouraged the establishment schools of lower samurai, but with a limited curriculum. During this period, the noticeably inferior quality of the education of low ranking retainers only widened with respect to the attainments of ranking leaders.

As you know, the history and understanding of martial arts can’t possibly be told in only a few sheets of paper, nor, without any martial arts training as a practitioner. Because of that, we the United Scorpion Karate-do Association have given you some basic history of what martial arts is and how it begun, and hope that your training experience in U.S.K.A. is a learning one and that it will pave roads to success in your future. Welcome to the United Scorpion Karate-do Association